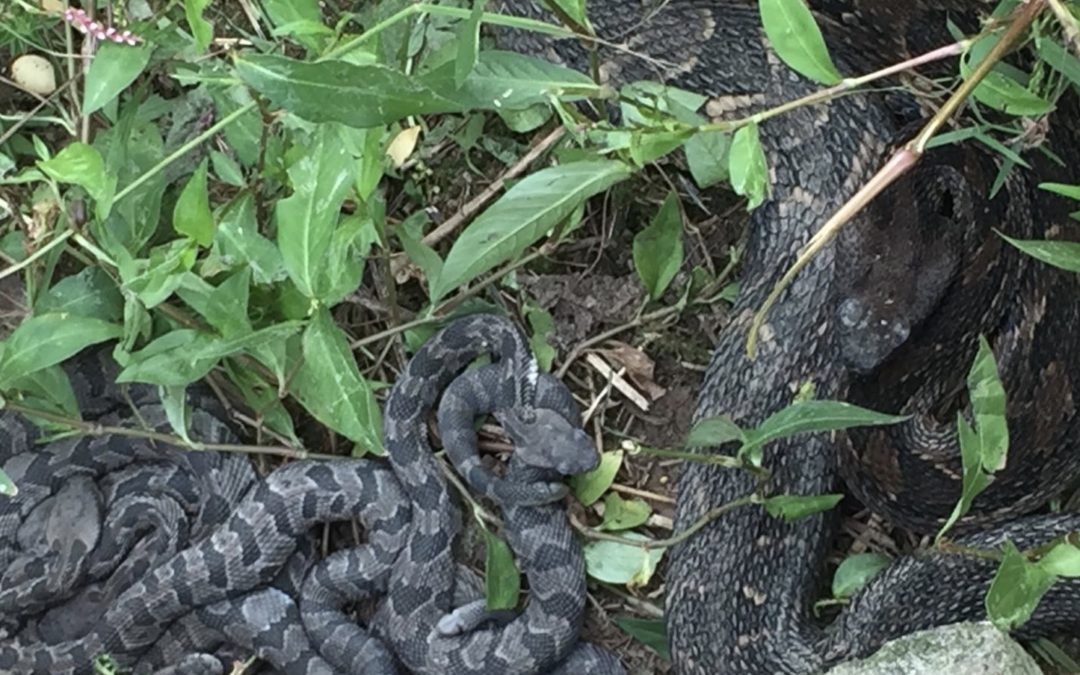 Back in September we noticed a stray squash vine growing, just off the back steps, with several green squashes on it.  The fruits really couldn’t be identified as any one specific squash, as it was a volunteer plant, and squash plants interbreed very readily.

Avi kept his eye on these squashes for a couple of weeks and one morning I heard him yelling, Terry, Terry, come here!  I went out there and he pulled back the leaves of the plant and lo and behold, there laid Chusi, a beautifully colored, perfectly healthy, nice size—- ummmm RATTLESNAKE!!!  Avi said he had his face down in the plants and just happened to see her out of the corner of his eye, just inches from his face.

I use the word “her” with confidence, because the next day she began having babies (omg).  We really wanted to relocate her but couldn’t find anyone available to do so, so we decided to just let nature take its course.  I had to chuckle at one phone call we made to a “wildlife removal specialist”—she said “could you take a picture of the snake and send it to me so I can verify that it is a rattlesnake?”  I told her that I could, but she was coiled up with the rattle right next to her head and she wiggled it when we got too close!

Every few hours we would check and there would be another baby.  And then another.  And another.  When she was finally through multiplying, there were six baby rattlesnakes!  Seeing all the babies all wadded up in a pile was a little unnerving, sort of like one of those bad dreams you might have once in a while, but everyone remained calm throughout the entire ordeal.

Of course we checked “the Google” to see what the behavior of a rattlesnake having babies would be, and turns out that the babies stick around mom until they’ve all molted, about a week or so.  Sure enough, they all molted, one-by-one.  Nat Geo at our back door!

The Google also said that mama would be very hungry after giving birth.  She was.  We checked after a few days and she had an enormous bulge in her mid-section that stayed for about two days.  She didn’t move for about 3 days, just basked in the sun while her babies danced and played all around (lol)!

After about 20 days I went out and had a talk with her.  All the babies had moved along and I told her that she was welcome for the secure place to have her babies but that it was time to move on.  She did.

BTW, the name “Chusi” is “snakeflower” in Native American language.